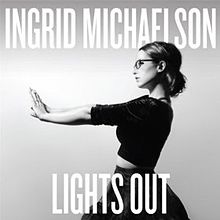 I’ve been a lover of Ingrid Michaelson since the summer before my senior year in high school. I’ll admit, I got a few of her albums from the public library. Yes..yes…I know..totally stealing. But it created in me a lifelong fan, and therefore, I think I’ve repaid my debt. But anyway, there was something about her first two albums that really hit me where I was in that stage of life. Maybe it was the light optimism in her acoustic, ukelele-filled songs about love and boys. I’m not sure. But I listened to Girls and Boys nonstop all summer long. I still play a lot of her music in the practice rooms at school when I’m feeling whatever.

I found out that she was at Basilica Block Party a few weekends ago and I about died when I realized I missed it. For how big a “fan” I consider myself, I really need to pay more attention to her tour dates…

I hadn’t listened to her stuff in a while. I kind of go through cycles in my music listening. I tend to beat albums to death because when I find one I like, I listen to it nonstop for months (I may have an addictive personality…). Because of this habit, I will all of the sudden get really sick of my own music and I’ll just drop leisure listening altogether for a few weeks. I know. I’m weird.

But when I found out she had a new album, I started streaming it on Spotify. Because I’m not a premium user, I have to stream from my phone on shuffle. So I was re-listening to her whole catalogue while hearing the new stuff mixed in, and it got me reminiscing and analyzing (as I so often do). So the following is my quirky mixture of fangirling and artist/album review:

I love Ingrid Michaleson and here’s why. There is a simple sophistication in her music, in both the lyrics and the melodies. One of my favorite things about her is that she chooses content that is sometimes complex but always relatable. I find myself resonating with her writing even when it’s something totally outside my field of experience. Additionally, she finds a way to put new words to familiar feelings that always enriches their meaning.

Her albums are striking and each has brought something unique to her artist catalogue. “Human Again” was all about the production for me. I was struck by the production in a couple ways. First, I felt the choices Michaelson made as an artist and, I’m assuming with the help of her producer David Kahne (who I’ve heard raving reviews about and would probably write one for this album), brought a complexity that enhanced the music and matured the album past where she was in Girls and Boys and Everybody. For example, the strings between lyrics in the chorus of Blood Brothers caused a serious music-nerd geek-out when I first heard them (listen here). Those details go unnoticed by most because they’re not intrusive, they only add to the song’s ability to take the listener somewhere. That was the magic for me: the place I go in my head when I hear “Blood Brothers” is a road trip across the Black Hills, windows down, and as those strings play during the chorus, my sense of adventure swells. It’s hard to beat a song that can take you somewhere so tangible (even if it’s totally random and weird, since I’ve never even been to the Black Hills).

I recall one critic described it as Michaelson stepping away from her “barefoot, happy, ukulele sound” with Human Again and “showing versatility and depth”. I 100% agree. I feel like “Lights Out” took her to another completely new place as an artist. And that’s what struck me about this most recent album. She took herself out of the spotlight and really used her album to point to the art of songwriting. When I first looked at the track list for this album, my first reaction was, “Wow, that’s a lot of songs featuring other artists.”

Later, I had a conversation with someone I consider to be a music expert. We critique music together on a regular basis, and a lot of times we agree. In this case, it was one of the few times we didn’t. She commented about the trend nowadays to add artists on your album when you need a little publicity boost. You hear hit after hit on the radio with “Mr. Worldwide” (Pitbull) doing a bridge, and it’s all to get people to listen. Her cynicism was mostly a joke, but it made me think, “Is that what Ingrid Michaelson was thinking when she made this album? Was she worried her career was on the way out, and therefore, she must need to add some other artists to make her music popular?”

Well those questions didn’t last long in my mind. It really doesn’t take too many listens of “Lights Out” to understand what Michaelson was going for. Her album is a tribute to songwriting. Each song she sings with another artist has a distinct personality. Each song stays true to the character of the featured artist. But what is cooler even still is that Michaelson doesn’t lose the integrity of her style in these collaborations either. What’s made is a beautiful hybrid of interwoven styles.

Take Over You, her song featuring A Great Big World. Following their hit with Christina Aguilera, we haven’t heard much from them, at least on the mainstream radio stations. Over You is raw and honest, something both Michaelson and A Great Big World do well (seriously, check this one out). It also seems clear, to me anyway, that they worked together to write it. With each partnership on her album, there is a sense of respect and awe for the art of the songwriter. If what I imagine is true, Michaelson and each of these artists met with only a blank sheet of paper in hand and a mutual desire to create something meaningful.

(I want to just say, for the record, that I really liked her solo songs, too. I just felt like something significant needed to be said of the character of the album as a whole, which, to me, was heavily determined by the presence of so many collaborations.)

I think Michaelson has done two things with this album, other than just writing good music. First, she has shown that collaborations can make something really unique and special. Now, maybe that’s something some people already knew, but I observe a general attitude toward collabs that they’re for artists who can’t stand on their own. What I saw in this album was beauty in sharing. The art created and meaning found in those songs made by multiple artists was deeper and more significant because of that partnership.

Second, Michaelson has jumped on the front end of a trend in the music industry that I don’t think is going to go away. We’ve seen what collaborations can do on the charts with A Great Big World’s Say Something. Michaelson’s work with artists like Matt Kearney, Storyman, and Trent Dabbs tell me that collaboration could be the thing that brings songwriting back to the forefront. Personally, I think that it’s something we need.

*After I wrote this, I did a little fact-checking. I’ve added a screenshot of the track listing from Wikipedia, and you’ll notice that there are only four songs on the album that weren’t written in collaboration. Success. 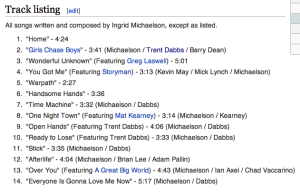 View all posts by alexjamieson11

1 thought on “The art of collaboration…”

First of many great summer nights • • #specialsiblings #golfnightout #takeback2020
All I’m saying is...Hezekiah had it right | it’s morning time...just give me a minute | it’s in the BIBLE